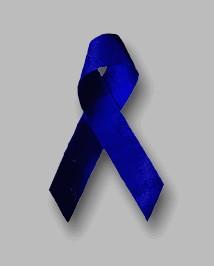 While orange ribbons have been seen on the streets of Israel for more than a month already, recently pro-disengagement activists started to hand out a blue ( or blue/white ) alternative. The other day I did something that I hardly ever did before: I made a political statement in public by tying a blue ribbon to the antenna of our car. I am not a fan of such statements, and the only other time that I made one was in the early 1980s when I wore one or more buttons with slogans against the deployment of American cruise missiles in the Netherlands. I did not participate in the huge demonstration in the Hague that protested that deployment, though ( I both hate and fear large crowds ).
The reason why this time I decided to openly express my opinion is that I think that because the opposition to the disengagement is so vocal and the subject so important ( without disengagement from Gaza each other withdrawal from occupied territories will become totally impossible, and in my view the occupation is one of the root causes of much of what is wrong in the Jewish state ) those who support disengagement should make their voices heard as well. A blue ribbon is not a sign that one loves Sharon ( his personal history makes it hard for me to love him as a political person, although I respect him in more than one way ) but that one wants him and his government to ( finally ) implement the disengagement plan. After the implementation we will see what can be done next. Personally I hope that this will be the beginning of the end of the occupation, but I have serious doubts that that hope will materialize.
Here you can read who is the big winner of the ribbon campaign:
For Roni Ratzon, the owner of the Jaffa textile factory cutting ribbons for both pros and cons, it's all very profitable. He's hired three extra workers and extended working hours from 10 to 24 hours a day so he can cut up to 100,000 orange and blue ribbons daily. "I have no political opinion. I am not a political person. I just want to make money," Ratzon said.
By the way, the blue ribbon icon I found at a website dedicated to a campaign against censorship and for free speech on the internet.
Posted by Bert at 12:01 AM