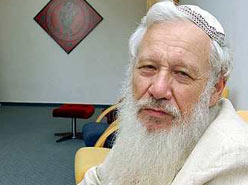 As in 2002 and last year at least one ( American-)Israeli is among the various Nobel prize winners. Congratulations to professor Robert J. ( Yisrael ) Aumann ( see the picture above ) who, like Daniel Kahneman in 2002, is one of the two recipients of the the 2005 Bank of Sweden Prize in Economic Sciences in Memory of Alfred Nobel . Together with Thomas C. Schelling Robert Aumann receives the prize "for having enhanced our understanding of conflict and cooperation through game-theory analysis".
If only our ministry of education - or rather Israel's political masters in general - fully understood that brainpower is our most valuable and strategic asset, and that seriously investing in education should be at the basis of each economic, social and even military-diplomatic policy plan of the Jewish state. Last year's recipients of the Nobel prize for chemistry, Aaron Ciechanover and Avram Hershko ( I almost wrote "the adorable..." before these two names, but that seemed a bit too much ) publicly linked outstanding education and winning something like a Nobel prize, and they argued in favor of investments in this country's education, but apart from all kinds of empty gestures of praise for the two Technion professors I am not aware of any special attention that their words received among Israel's decision makers.
Posted by Bert at 2:17 PM