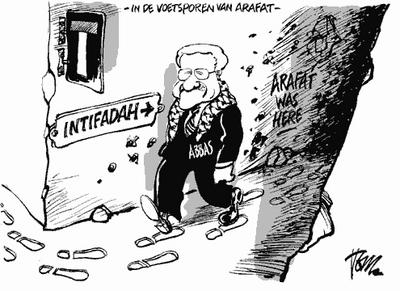 Mahmoud Abbas, unlike his predecessor, cares for much more than only his personal well-being and wealth, and appears to have a very keen understanding of Israel's internal political powerplays, as well as of his own strengths and weaknesses. I very much liked the way in which the Dutch cartoonist Tom Janssen viewed Abbas ( "In the footsteps of Arafat" ). ( Ha'Aretz News Flash ) 13:38 Abbas to Palestinian factions: Don`t give Israel any excuses (Haaretz)
Posted by Bert at 2:12 PM