Whereas in the United States the opponents of abortion settle for grafic depictions of unborn babies being butchered ( and for the occasional attack on abortion clinics and gynaecologists and nurses who work in such clinics ) to make their case, here in Israel the 'pro-life'rs have another tool: racial hatred and fear. On the website of Yedioth Aharonoth, a respected newspaper, you can see a small window with the face of good old Binyamin Nethanyahu. It says "If Israel's Arabs reach 40%, the Jewish State is abolished. For the only solution ( sic ) click here." When you click on the window you reach the website of an organization called Efrat.
Talking about people who believe in exclusive solutions, if you think the above was shocking, try this news item on Sky News, that I read yesterday. Two beautiful 13-year old twin sisters from some place in California turn out to be the most adorable figurehead that the white supremacy movement ever had. The twins, who perform under the name "Prussian Blue", sing songs about Rudolf Hess as a martyr, about white power and survival etc. These songs bear titles such as "Aryan man awake" and "The road to Valhalla". The girls' mother, April Gaede, is an activist in the National Vanguard movement. Their baby sister is called Dresden. 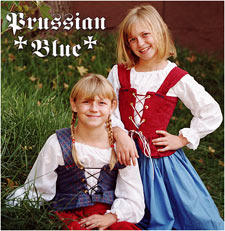 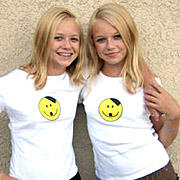 Normally I do not waste my time by seriously reading racist and anti-Semitic ravings, but yesterday I could not help myself, and through Google read some stuff about the duo and about NV. Also, I hardly ever post links to websites that I do not really agree with, let alone links to websites that spread ideas that I loathe, but this time I made an exception, probably because I was so shocked. For the same reason I posted two pictures of the girls. Look at the t-shirts on the second picture, that is a Smiley that I never saw before.

Two examples of NV ravings. The National Vanguard opposed/s the Iraq war. Guess why? Because the Jews forced it upon America. To be honest, less rabid anti-Semites have hinted at this as well. After all, didn't men such as Wolfowitz and Krauthammer ( not to forget Ariel Sharon himself ) push Bush towads the invasion? According to 'National Vanguard writer, leader, and media innovator Michael Medeiros', " Understanding the Jewish question is absolutely essential if one wishes to understand the ongoing plight of White people in the world today."

Talking about Nazism with a ( cute ) human face. By the way, asked what they think is "the most important social issue facing the white race right now", one of the girls answered: " Not having enough white babies born to replace ourselves..." Doesn't this ring a bell? ( Hint: search within this posting ).