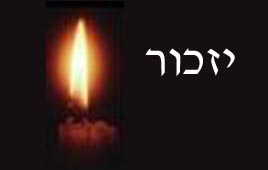 Today Israel remembers and honors those "who gave their lives for the achievement of the country's independence and its continued existence". Since 1860, "the year that the first Jewish settlers left the secure walls of Jerusalem to build new Jewish neighborhoods", 22.123 men and women have been killed defending the land of Israel. I do not know if that number includes the more than 3000 men, women and children who were murdered in acts of terror. Unfortunately there is an ugly struggle between different organizations about the question who should be included in the definition "The fallen of Israel's wars".

To me Israel, more than any other country, is one big circle of life. Yesterday, one hour after sirens all over the country announced the beginning of Yom HaZikaron ( Remembrance Day ), my wife and I were in a gynaecologist's clinic for an extensive ultrasound checkup of our third child, who G'd willing will be born towards the end of October. This test generally takes place some time during the third month of the pregnancy: right after we knew that my wife is pregnant we made an appointment with this specialist to be sure that the scan could be performed in the appropriate 'window' in the pregnancy, 9 PM on the eve of Remembrance Day was one of the few appointments that were still available this week. During the scan the doctor checks if everything is o.k. ( Barukh HaShem everything looked fine ) and - if the parents want to know - whether it is a boy or a girl. Right at the beginning of the scan it was obvious that we are talking about another son. Since the state was established Israeli mothers who gave birth to a baby boy have hoped and prayed that by the time their sons reached the age of 18 they would not have to join the army and fight anymore, but I am afraid those hopes and prayers will not be answered in the foreseeable future. Still, let's hope that when this yet unborn baby boy will become a soldier 'the situation' will be a bit better and more hopeful than today, with less threats and enemies facing us and some sort of peaceful coexistence between us and our neighbors having replaced the current reality.