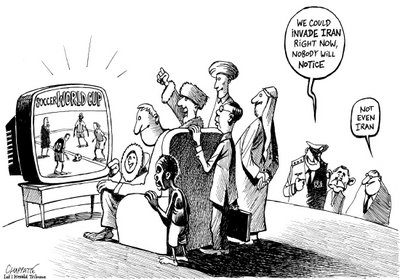 This cartoon, by Chappatte, is not one of his best, but because:

I posted it anyway. I am not one of the 38.000 Israelis who subscribed to a package that includes broadcasts of all the WC games. I am not a real sports fan, and I think that paying 4-500 NIS a year to the Israel Broadcast Authority plus a high monthly fee to the Yes satellite company is enough. It is ridiculous that we are forced to pay extra if we want to watch all matches, the IBA and/or ( one of ) the two commercial channels should have been given the broadcast rights. If Holland makes it to the final ( fat chance ) I might watch that game, like the opening game and a few other matches it will be broadcast on one of the channels that we can watch 'for free' ( channel 10, 11 or 22 ). The rest of the games I might follow by once in a while visiting any of the sites that keeps the scores.