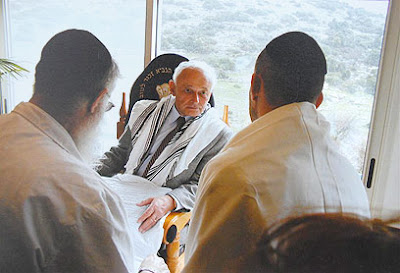 Professor Librescu was the sandak at the brit of his grandson, three years ago. If I am not mistaken the mohel is the same person who performed the circumcision on our two sons.


One reader who commented on an article in the Dutch populist daily Telegraaf about professor Liviu Librescu z"l, one of the victims of the Virginia Tech massacre, was unable to simply appreciate the heroic way in which the poor man died, according to some of his students. The hatred of everything Israeli ( and/or Jewish ) surpasses everything as far as someone like a certain Alex from Alkmaar is concerned. He writes "Why does it say Israeli lecturer, though he was born in Rumania and had lived and taught in America for 20 years? Must be another attempt to promote Israel. But we don't buy that. Israel is what South Africa used to be. A group of colonists occupies a country and exploits the original inhabitants. Makes them work for a pittance and live in townships on the occupied Westbank and in the Gaza Strip. For once let us think about the Palestinians on May 5th ( the day on which the Dutch celebrate the liberation from the Nazi-German occupation, BdB )." Fortunately most of the other readers criticize this Alex and express their admiration for professor Librescu's courage.
After the news of the massacre became known the Israeli embassy in Washington reported at first that all Israeli students and lecturers at Virginia Tech were safe and sound. They turned out to be wrong, unless - what seems to be unlikely - the professor was no longer an Israeli citizen.
Posted by Bert at 5:14 PM