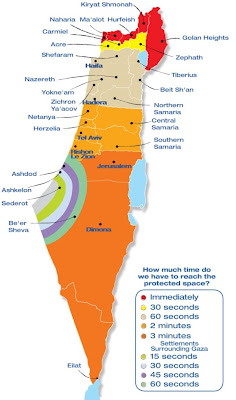 We live in the 60 seconds' zone...
( although I suppose it all depends on the direction from which
the missiles etc. will be coming )
In about an hour I will be sitting in our house's Residential Secure Space ( Mama'd ), waiting for the all clear sign. This week all over Israel different kinds of emergency situations are simulated, as part of national home front drill 'Turning Point 3'. For more information see the website of the Home Front Command. I think this is the biggest nationwide home front drill ever, at least it is the one that received the most publicity. Whether this drill receives so much attention because of the war experiences of 2006 and 2008-9, because with the more than imaginary Iranian threat we know that this one is for real, or because a very experienced and professional deputy minister of Defense ( Matan Vilna'i ) is in charge, I do not know. What I do know is that for more than a week our six-year-old son has been looking forward to and worried about having to enter the air-raid shelter at school today. My wife prepared a game for his class to play during their time in the shelter. He was only three years old during the Lebanon war, and experienced the war of 2006 only for one week, most of it with us in the mama'd, but still he gets very anxious whenever he hears a siren, fireworks, etc. Just imagine how traumatized thousands of other children in Haifa, Sderot, Gaza, Qiryat Shmonah, Beirut, and Ashkelon - who have gone through many, many weeks of very intensive rocket attacks and bombardments - must be. PS: Although I intended to read a few more pages of The Kite Runner ( I only started reading the book yesterday, and am enjoying it very much ), I watched television instead. The members of the Knesset gave their usual good citizens' example to the public, by continuing the committee meeting that was broadcast live as if there was no drill whatsoever going on. I am sure that most of the schools and local authorities were more responsible and did what the Home Command told them to do.
Posted by Bert at 9:45 AM