"Richard Branson: On scale of 0-10, Israel scores a 0 for PR" Amen to that! I would add that not only Israel's actions, but also the lack of professionalism ( knowledge of languages and foreign cultures ), wisdom and true Zionist - not purely ideological, rightwing nationalist - commitment on the side of many Israeli PR-workers, plus the work of many Israeli politicians, are to blame for the very, very, very poor PR-situation of this country.
Posted by Bert at 11:16 AM No comments:

Arik Einstein: They told him 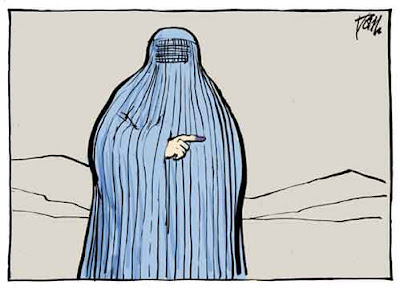 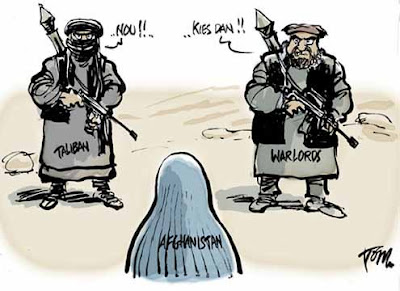 Joep Bertrams' vision on this week's elections in Afghanistan. 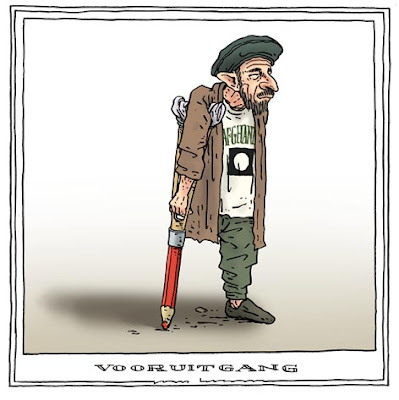 Progress
Posted by Bert at 10:32 AM No comments:

Yesterday evening, the makers of the Channel 2 satirical show Nightclub ( Mo'adon Layla ) had this disturbed individual as a video guest. I do not know why, they probably thought that she would be funny or could be made fun of. When she literally said that Barack Obama is worse than Adolf Hitler, even Erez Tal, Ido Rosenblum, Yisrael Katorza etc. thought it too much. Rosenblum asked if she could not be turned off, but dr. Taitz herself had already taken off her microphone and walked away. Thank G'd Israel has so much more to offer than the criminal, deeply troubled and other individuals who in recent months have made clear to the world that this country has its more than fair share of nutcases and crooks.
Posted by Bert at 12:32 PM No comments:

When I write an opinion article for a Dutch daily - in which I claim that most so-called supporters of either the Palestinians or Israel spend most of their 'support'-time blaming 'the other side', and that hardly any of them is able or willing to admit that the side that (s)he supports might be at fault too - most if not all commentators focus on 'proving' once again how guilty and evil the other side and its supporters are. The Hebrew version of my last article was not very well edited by Ynet, I must say. If you read the article superficially, you might think that the 'ugliness' of some Israeli tourists abroad, something that only was a trigger for the piece, is the main point that I wanted to make. For instance, the title chosen by the site's editors, "The ugly Israeli in his full glory", diverts attention from the central subject of the article: the way(s) in which Israelis often deal with criticism. Anyway, if you read the article with a minimum of real interest, you will get my main point easily. Some readers certainly did get it, given a number of very good comments ( some of which point out that most comments prove exactly what I intented to say, which is also the main point of this blog posting ). Some of my 'supporters' go totally over the top, saying that Israelis in general behave in ugly ways; I specifically deny that in the article, although in the Hebrew version that is less clear. Still, most of the comments can be categorized into four basic statements, each of which is somehow mentioned in the article itself:
Posted by Bert at 5:30 PM No comments:

Meir Banai - The Gate of Compassion

The article that appeared last week in Dutch, and earlier this week in English, today is published in Hebrew. Finally the article's subject can read it. ;-)
Posted by Bert at 12:46 PM No comments:

The following article appears on Ynet today.
Stop shooting the messenger
While I was planning and preparing a trip to Holland for my wife and our two eldest children, I was looking for information about an interactive museum of the human body, near Leiden. I came across a tourists' forum in Hebrew. Besides useful information about the museum, I also read something that really offended me. In Holland , access to about 400 museums can be bought with just one card, the Museum Card, for 35 Euro a year. The card pays off already after three or four museum visits, and most of the museums that tourists tend to visit are included. The card bears your name, but no picture. Enters the Israeli commercial and criminal ingenuity. On the forum people offer to 'rent out' or sell their card to other tourists. Just send an e-mail if you are interested. One forum visitor denounced this un-kosher business. He (or she, you never know on such fora) pointed out that giving, renting out or selling such a card to somebody else is a form of theft: “Afterwards we do not understand why they hate our guts, and why our state looks and functions the way it does. […] We can always cry that the whole world is against us anyway, but our image abroad is largely also our own responsibility, or our own fault”. Not surprisingly (s)he was attacked quite fiercely for using the phrase "the ugly Israeli", and for criticizing those outstanding citizens who, of course, only want to help their fellow travelers and whose intentions are pure as snow. This verbal attack reminded me of the way in which Israelis often deal with criticism. We hate to hear that we are far from perfect, and love to shoot any messenger who tells us that something, anything, is not right in the Holy Land . When outsiders critize us and show us some of the seedier sides of the reality that we have created and live in, we can always claim that those outsiders do not understand that reality, that they do not know what we know, or that they are simply anti-Semites. Such accusations become slightly less plausible when Israelis with impeccable zionist credentials voice their criticism and concerns. For such men and women labels like 'traitor' or 'self-hater' are often used. When abuse within the armored corps is exposed, rightwingers try to convince new recruits that they should keep information about abuse to themselves. When an Israeli NGO reports about possible violent excesses during the war in Gaza, Israeli diplomats complain that that organization receives funds from EU governments. A large part of Israel's official, semi-official and private hasbara-efforts is aimed at griping about the messengers. There is no doubt that some, maybe even many of the outsiders who follow and cover events in and around Israel are biased, and that that bias is often expressed in the media abroad. Also, some of the Jews and Israelis who denounce Israel in international fora might very well suffer from a certain degree of self-hatred or a highly complex form of anti-Semitism. Still, we should stop focusing on attacking any messenger who tells us something that we do not want to hear or see. Nobody seems to believe that maybe, just maybe, we ourselves should try to change the reality that is reflected in the negative messages. No matter how biased messengers can be, there is a limit to how far they can bend or invent the truth. We ought to be wise enough to distinguish between Israel/Jew-hatred and genuine criticism from foreign friends and true Zionists. If we have nothing to hide or to be ashamed of, we should be confident enough not to push the panic button whenever an in- or outsider washes Israel 's dirty linen in public. Let me finish by quoting the forum visitor whom I mentioned earlier. His or her words express what I often feel when I see, hear, or read about the not so pretty sides of the country where I chose to live, marry and raise my children. Probably other proud but critical Zionists, born here or elsewhere, will recognize these feelings: “Obviously most Israelis are perfectly all right. It is a fact that I live here, and not in Europe , where I was born. I would not be so annoyed […] if I did not love this country and this state so much. Some ugly people ruined and continue to ruin it, and they would not be able to do that if we had not gotten used to it, if we did not find all kinds of excuses that ‘explain’ why this is not so bad, and if we did not call black grey and grey white. What I denounce most is the fact that we prefer to justify illegal and unjust behavior, rather than to admit that we are talking about some ugly phenomena that eventually hurt ourselves and our state”.
Posted by Bert at 4:31 PM No comments:

A bit of pride

Though I prefer not to start pointing accusing fingers until the perpetrator of last week's attack in the gay community center in Tel Aviv is caught or at least identified, feedbacks to articles such as this one show that Jews and Israelis can be not only as liberal but also as homophobic as anybody else. It is true, compared to other countries in the region the Holy Land is a safe haven for gays. But still, true tolerance is far from obvious here. On the other hand, it is just as far from obvious in Holland, where indifference and opportunism have more than once been mistaken for tolerance, I am afraid. I liked the comment by one David from Haifa. One feedbacker from Ra'anana writes that after last night's solidarity rally in Tel Aviv - with President Peres as the main speaker - he is "embarrassed before the decent people of the world" because Israeli VIPs "come to lend support, publicly, to a perversion". To which David responds ( I added some parts ): "You mean the ultra-orthodox who desecrate every shabbat in order to express support for child abusers or who protest violently against a democratic decision that they disagree with, or the ayatollahs in Iran who hang gays, or all other bigots like you? Thank G'd I am indecent, i.e. I support diversity and am all in favor of "Live and let live"." Amen to that. By the way, the Hebrew word for 'gay' is 'ge'eh', which means 'proud'. I like that term, more than a far less tolerant description that you might hear from elderly Ashkenazim, 'faygeleh' ( Yiddish for 'little bird' ).
Posted by Bert at 9:51 AM No comments:

Shlomo Artzi - More than this we do not need

Lyrics: Avi Koren, Music: Shmuel Imberman A more recent version, also by Shlomo Artzi, can be found here. In the following weeks I will post - automatically - one of my favorite songs in Hebrew, every motsa'ey shabbat. A nice way to say: Shavua Tov!
Posted by Bert at 7:52 PM No comments:

Read on Ynet: "Tourism Minister Stas Misezhnikov has asked Defense Minister Ehud Barak to instruct army officials to refrain from discussing the security situation on the media, "as this harms Israel's image." Misezhnikov wrote in a letter to Barak that "the talks about war on the northern border are unnecessary and harm tourism." He sent the letter following Brigadier-General Alon Friedman's interview to British Time newspaper." NB: The leader of Mr Misezhnikov's party is Avigdor Lieberman.
Posted by Bert at 4:50 PM No comments:

Yitzhak Ben-Yisrael often has interesting things to say. I totally agree with what he wrote last week for Ynet. By the way, on Friday or Sunday Ynet will publish an article that I wrote. A Dutch, slightly adapted, version of that piece will appear on Friday in the daily Friesch Dagblad.
Posted by Bert at 8:18 AM No comments: