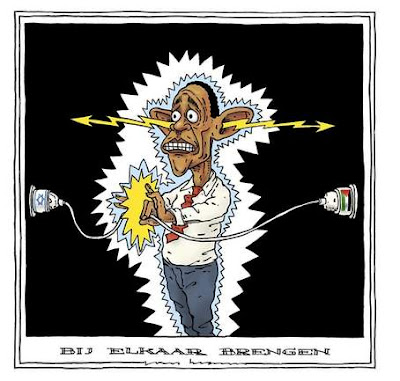 Bringing together
Dutch cartoonist Joep Bertrams' view on the meeting between Barack Obama, Mahmoud Abbas and Binyamin Nethanyahu.
PS: Never mind the cynical comments and the low expectations about the meeting. One thing is for sure: in eight months Mr Obama has invested more personal energy in trying to bring Israel and the Palestinians back to the negotiating table than his predecessor did in eight years. That Obama is trying to re-kickstart those negotiations from a relatively weak position ( economic crisis, weakened international position of the US, internal political troubles ) is not exactly or mainly his own or his party's fault, I would say.
Posted by Bert at 2:41 PM