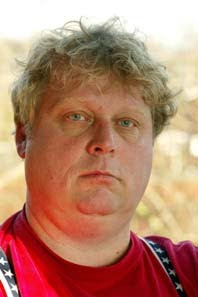 Theo van Gogh ( The Hague, 1957 - Amsterdam 2004 )
Two men, totally different. Their murderers have a lot in common, much more than these two men ever shared. Both the murderers are religious fanatics, one Jewish, the other Muslim. In more than one way, both murderers reached their goal(s). To me it seems that the supporters of both murderers are today stronger than they were when Rabin, resp. Van Gogh were murdered. Yesterday it was five years ago that Van Gogh died in Amsterdam. Tomorrow fourteen years will have passed since Rabin died in Tel Aviv. Their pictures I found here and here.
Posted by Bert at 7:27 AM