What a wonderful country 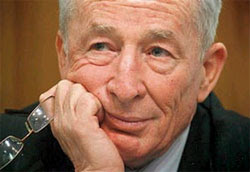 Yoffie, Israel's Justice Minister has chosen a new Attorney General. Yehudah Weinstein, a prominent white-collar-crime lawyer who was the legal advisor to, among others, a current and a former Prime Minister plus a convicted criminal who one day might yet again play a central role in national politics ( and whom I more or less respected until he actually compared his trial and conviction to those of Demjanjuk - whose conviction in fact was overturned and who G'd willing will stand trial again, this time in Germany - and Eichmann, in a totally absurd and shocking video ). Congratulations to Mr Weinstein!
Two remarks/questions:
1) I am sure that the new AG has all the necessary qualifications, but doesn't the fact that he was the legal advisor of men like Mr Nethanyahu, Mr Olmert - whose legal troubles are still far from over, if I am not mistaken - and Mr Deri disqualify Mr Weinstein from becoming the person who will have to decide whether high-ranking politicians and officials in this country should be prosecuted?
2) Isn't it ironic that the current AG, Menahem Mazuz, who was born in Tunisia in a traditional-religious family and is sefardi, was appointed by the late Yosef 'Tommy' Lapid, who in the eyes of many sefardim symbolized the hatred of the ashkenazi establishment towards sefardi and religious Jews, whereas Yehudah Weinstein, apparently about as ashkenazi as they come, will be appointed under a government that has come to power with broad support from all those who, like Mr Deri, have always felt - or at least claim to have been - left out by ashkenazis, the Left, the establishment, the judicial system, etc.?
Posted by Bert at 1:02 PM