With chaotic and violent events such as the one that took place near the shores of Gaza today, it is very hard to establish facts. That is why I cannot guarantee the total accurateness of what Ron Ben-Yishai writes here. But as far as I am aware, he is not a sensationalist, his insights are mostly interesting and useful, and his sources and reports are usually reliable.
Posted by Bert at 3:58 PM 3 comments: Links to this post

Lisa's Back in Business

I was pleasantly surprised to see that Lisa Goldman has been blogging again recently. At least one sane ( i.e. leftwing Zionist, the majority of Israel-based bloggers is or has become pretty rightwing ) voice is back in business. Twice I had the pleasure to have breakfast with Lisa in Tel Aviv, and a few times I asked her for advice. She and I agree on many things, I got the impression. Lisa writes very well, has outspoken and clear views on much of what is going on here. Unlike me, she writes for a living and has time to write extensively about what amazes and annoys her. For example the wonderful work done by Israel's Government Press Office, headed by Danny Seaman. She also has written about the Free Gaza flotilla ( now there's a word that English speakers and learners who follow the Israel-related news will not forget easily ), and I am pretty sure that she will write more on the subject. I don't have the time and/or the patience to write about anything right now, although I feel an article in Dutch coming up.
Posted by Bert at 3:12 PM No comments: Links to this post

The ultimate test of loyalty, for an immigrant, seems to be the question: "What team do you support, if A (country where you were born) plays against B (country where you live)?". My answer usually is: "Whichever of the two teams has more chance of making it to the next round/final etc.". In the case of soccer, for the last 18 years ( I came to Israel in June 1992, for one year, I have been here ever since ) that has always meant Holland. As far as I am aware, the Dutch are slightly better and more successful soccer players than the Israelis. Last night both Holland and Israel participated in the second semi-final of the Eurovision Song Contest. I did not watch the competition, there were more interesting things to do, but I had heard both the Israeli and the Dutch song before. If I had been asked the above mentioned question - with 'team' replaced by 'singer', and 'plays' by 'competes', or 'sings' - I would have said 'Israel'. The Israeli singer is a very talented and nice guy, and unlike the Dutch song his is not really annoying, and sounds original. By the way, when I read this morning that Holland once again did not make it to the finals, I was reminded of the name of the writer of the Dutch song. His name is Pierre Kartner, a.k.a. Father Abraham, who has been a very successful writer of songs for others, and who was himself very popular in the 1970s. Now his Smurfs' song got stuck in my head. Before the invention of the CD, when I was very young, I owned only four records. One was Arrival, by Abba, another was an album by two Dutch comedians, the third was The Marvelous adventures of Herman van Veen, and the fourth one was a single with the Smurfs' song and the (Dutch) original version of this song. Shabbat shalom.
Posted by Bert at 7:34 AM No comments: Links to this post

Next month many Israelis, together with hundreds of millions of people around the world, will spend hours and hours in front of the television, to watch the games of what here is often called "HaMundial". Unike Israel, Holland will also play at the World Championship. This morning I read a column by Dutch Olympic swimming champion Pieter van den Hoogenband who writes that his Italian and German colleagues often tease him with the following joke: "What does a Dutchman do when the Dutch soccer team becomes World Champion? He turns off his Playstation."
Posted by Bert at 8:40 AM No comments: Links to this post 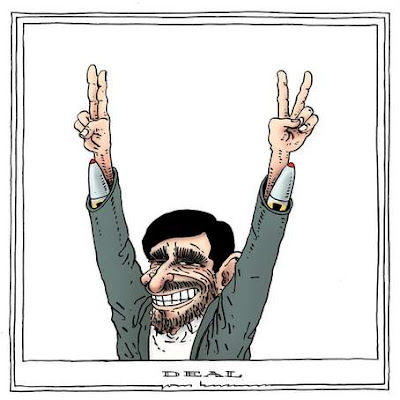 Joep Bertam's vision on the nuclear 'deal' that Iran cooked up with Turkey and Brasil. No time to write anything of my own these days, I am editing a book ( sorry, in Dutch ), the first version of which I plan to have ready by Monday. By the way, Iran features prominently in that book.
Posted by Bert at 8:14 AM 2 comments: Links to this post

About half of the names of the members of the new British cabinet, I 'know' more or - mostly - less. Let's wait and see, I wish them good luck. At least building a government did not take very long, less than a week ( and it could have taken much less ). What I find ironic is:
Posted by Bert at 5:05 PM 3 comments: Links to this post

When I checked my e-mails, I thought I'd have a quick look at the headlines. I then found out that a Libyan Airbus A330 airplane had crashed near Tripoli, and that more than half of the 100+ victims are Dutch. May they rest in peace. Identification teams will probably be sent out to Libia. One young boy miraculously survived the crash. Until further notice, the political campaigns for the parliamentary elections on 9 June have been put on hold. For some reason, unknown to me, the Twitter messages by Dutch celebrities ( several of the names are totally unknown to be, but that is probably my fault, not theirs ) about this disaster 'received' a whole article on the website of the largest Dutch daily. That newspaper will come out with a special free edition tomorrow ( Ascension Day ).
Posted by Bert at 4:25 PM No comments: Links to this post

Several times a week I pass the turn for the jail where - if the information that I have is correct - Adolf Eichmann, may his name and memory be erased ( I should not write that, as a historian, I know ), was held after he was captured and before he was put on trial. This week it will be fifty years since the man was captured in Argentina. Haaretz published a very interesting article about it. Recommended reading. Shabbat shalom.
Posted by Bert at 7:50 PM No comments: Links to this post

In this article you can see how twisted the vision of some of us is when they view whether someone ( or a party, a country, and so on ) is 'pro-Israel' or 'anti-Israel', a friend or a foe. I agree that Jenny Tonge is anti-Israel, but I am not sure the LibDem party as such is an enemy of the Jewish state. What is more interesting - and more relevant, since the Lib-Dem can at the most have only an indirect impact on British foreign policy - is to see what the article's author views as proof of an anti-Israel attitude. Pleading in favor of banning exports from the settlements to the EU has nothing to do with being anti-Israel. On the contrary, I would almost say. I consider myself very much pro-Israel ( I chose to come and live and raise my family here, didn't I? ), but like Gordon Brown I absolutely oppose Israel's settlement policies. I am against the occupation, not because I believe even for one minute that evacuating the settlements and the establishment will end 'the' conflict, but because I am convinced that the occupation hurts (and weakens, and eventually might even destroy) Israel ( politically, morally, economically, socially, militarily ) almost more than it hurts the Palestinians. I welcome the criticism of any outsider who expresses his/her opposition to the occupation AND his/her support for Israel and for a two-state-outcome of the conflict. Criticism of Israel's policies in East-Jerusalem, mentioned as 'proof' of David Cameron being not entirely pro-Israel, also is not exactly a reason to doubt that man's attitude towards us. As I have said over and over again: as long as we keep on declaring kosher only those who (claim they) really love the way we sing and who sing with us, and treife everyone who dares to say that there are a few things that we might - or heaven forbid, should - do differently, and as long as we do not decide for ourselves what kind of state we want, we will not be truly independent, we will have to look forward anxiously to elections in foreign countries to see and decide whether the outcome will be good or bad for 'the Jews', and our fate will be decided by others, many of whom are definitely not on our side.
Posted by Bert at 2:31 PM No comments: Links to this post

There was a wizard in Israel

Today's episode of the Wizard of Id reminded me of Simon Bar Kokhba, whose story and deeds are recounted every year during Lag Ba'Omer, which was celebrated last week. Our three-year-old son already sang the song "There was a man in Israel, Bar Kokhba was his name" a year ago. This year he sang the song again, but he also learnt the stories of Bar Kokhba and Rabbi Akiva. He told me that Bar Kokhba was thrown into a lion's den, but that he became friends with the lion after he removed a thorn from the lion's paw.
Posted by Bert at 8:33 AM No comments: Links to this post

A few remarks about this investigation: 1) If all the accusations are true ( and at least most of them probably are, in one way or another ), they really appear to be a stain on Mr Goldstone's past. I doubt, though, if his 'bosses' at the UN did not know about all this, the information obviously is not new. 2) I seriously doubt if this was an independent journalistic investigation. It seems that somehow the Foreign Ministry and several politicians received its findings long before the public - informing which normally should be Yedioth Aharonoth's main concern - got them. 3) I am definitely not a fan of the Goldstone report, I think it was very flawed and utterly biased. 4) Still, I am neither convinced by this rather lame PR-counterattack. As I have said so often, Israel should worry about but not merely react and respond to what others do and say, the country should decide for itself what it wants and needs, and start acting accordingly in a proactive manner. Shooting messengers - no matter whether they are friends, enemies, or something in between - over and over again will not solve our (PR-related and other) troubles. 5 ( last and certainly not least ) The Foreign Ministry apparently forgets to mention, or does not want to be remembered of the fact, that - as far as I am aware and remember - Israel was on more than one occasion, and even during South Africa's darkest days, a staunch and active ally and partner of the Apartheid regime. So don't be surprised if this PR-effort is somehow going to backfire. By the way, it is slightly ironic that davka our Foreign Minister and his deputy, who both belong to a party that often has been labeled as racist ( anti-Arab ), are Mr Goldstone's main accusers. I would almost say that it takes two to know one.
Posted by Bert at 7:24 PM No comments: Links to this post