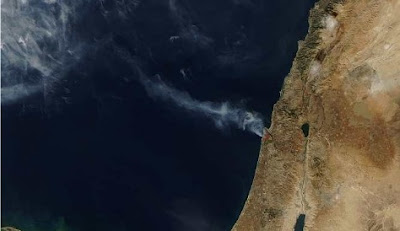 Now you can see more or less where I live: right above the source of the enormous pall of smoke. The picture I found on the website of Ha'Aretz. All the time now we hear airplanes and helicopters flying over, on their way to and from the seats of fire. This morning I saw something that would have been very funny if the whole situation were not so sad. After we got up I turned on the television to see if there was any news. One of the three main channels broadcast reruns of a breakfast show. For today they had chosen (I assume it was pre-programmed and not a deliberate choice) a rerun of a show that was broadcast originally in spring. In the show tips were given on what to eat and do on Lag Ba'Omer, the holiday (between Pesach and Shavuot) when kids light bonfires all over the country. By the way, it is ironic that during Chanukkah the Greeks have come to help us Jews extinguish a fire. You have to understand Hebrew to understand what is funny about the following; in Hebrew Mekhabim (extinguishers, as in fire fighters, mekhabey esh) is written with the same letters as Maccabees: HaYevanim Ozrim laMekhabim (the Greeks help the extinguishers/Maccabees).
Posted by Bert at 9:23 AM