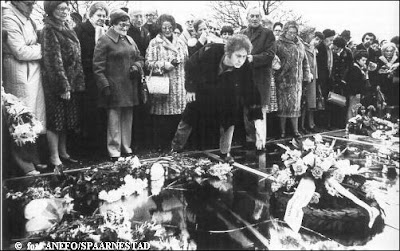 Jan Wolkers at the unveiling of the monument in 1977 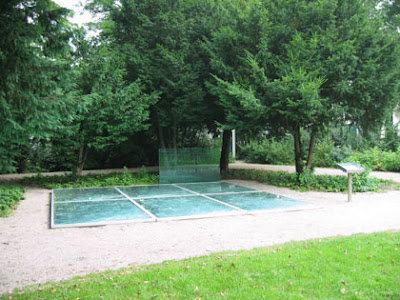 The monument at the Wertheimpark

Yesterday one of my favorite Dutch writers passed away. Jan Wolkers was not only a writer, he was first of all an artist. He made the Auschwitz Monument in Amsterdam, large cracked glass mirrors with the words "Never again Auschwitz". This is what he said about his design: "'It seemed impossible to design a memorial for de site of the urn containing ashes of the victims murdered in Auschwitz Concentration Camp to be laid to rest in Dutch soil. How can you devise a form to mark a crime of such horrendous proportions, that you know in your heart that it cannot ever be forgiven. To attempt to find an image to reflect the ignominy and the suffering transcends the limit of your comprehension. When you look up at the sky, it is impossible to imagine the same sun shining over that destruction as indifferently en peacefully as over a meadow filled with flowers. In a vision of justice, the blue sky above you cracks apart as if the horrors that took place on earth below have desecrated eternity for ever. That is what led me to place those broken mirrors on that small plot of ground above the urn. Here you will never again see heaven reflected without the cracks of shame".

In 1977 the monument that he made was unveiled at the Oosterbegraafplaats, a cemetery in Amsterdam. It replaced a simple stone monument that had been there since 1952. In 1993 the monument was enlarged and replaced to the Wertheim park in the Dutch capital. Since then this is where the Auschwitz remembrance ceremony takes place every year.
Posted by Bert at 9:37 AM