Two Dutch cartoons about the situation in and around Zimbabwe. 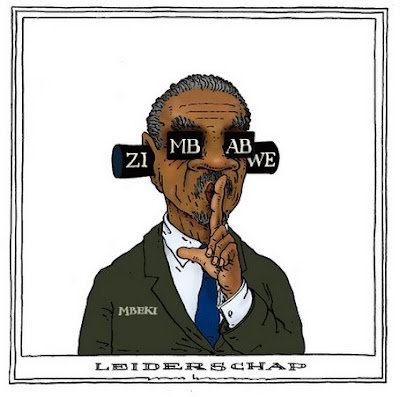 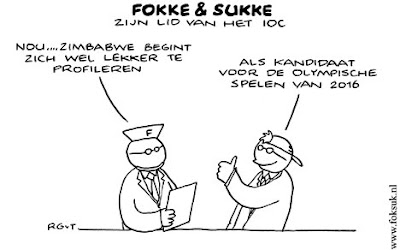 Fokke & Sukke are members of the IOC: "Well, Zimbabwe has started to present itself pretty well - as a candidate for the Olympic Games of 2016".
Posted by Bert at 12:31 PM No comments:

The collapse of democracy, a Dutch example

Earlier this week a hostage crisis, which even made the headlines in foreign media, took place in the Dutch city of Almelo. An official of the local authorities was held at gunpoint by a citizen ( of Turkish descent, as one commentator/bystander pointed out ) who appeared to be unhappy about some measure or policy that affects his business. Too many people honestly believe that violence is if not a legitimate then at least an acceptable means to achieve one's goals. As with 9/11, the murder of Theo van Gogh, and the threats against people like Geert Wilders and Ayaan Hirsi Ali, many online commentators used the "This act can not be justified, BUT...." line of arguing. Bureaucracy, politicians and other persons, groups or mechanisms are blamed for society's ailments, and those who choose non-democratic means to make a point, vent their rage and/or pursue their personal aims can automatically count on the sympathy of some or many ordinary citizens, who simply seem to lack the 'courage' to do what terrorists and bullies do.
Posted by Bert at 2:41 PM No comments: 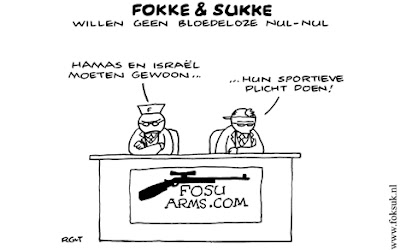 Fokke & Sukke do not want a bloodless nil-nil: "Hamas and Israel just should...show sport and perform their duties ".

One of the reasons why I admire the makers of the Dutch cartoon Fokke & Sukke is the fact that they often manage to combine two or more hot news items into one - often quite funny - cartoon. Here they refer to both the fragile ceasefire between Hamas/Gaza and Israel which started this morning, and the UEFA Euro 2008 football/soccer championship, i.e. the game Netherlands-Romania the other day.

This morning I read the sad news that Dutch defender Khalid Boulahrouz' prematurely born baby daughter had died in a Lausanne, Switzerland, hospital, where his pregnant wife was taken yesterday. Poor family. 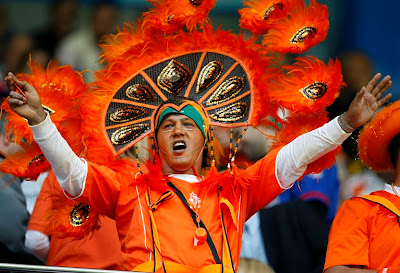 What is good for America...

This is a rough translation ( for the Poligazette ) of the previous posting, which was published in the Dutch daily Friesch Dagblad.
Four years ago, when American voters were able to choose between four more years with Bush jr. and the unknown alternative which John Kerry offered, I wrote that Kerry's election would probably be better for Israel and the Palestinians than the re-election of George W. Bush. The main basis for my assumption was the fact that at that moment ( August 2004 ) the deadlock of the Palestinian-Israeli conflict had only one variable which was not hopelessly and rigidly stuck: the American presidency. Since then both Israel and the Palestinians got new leaders, but few people will tell you with a straight face that, leader-wise, compared to four years ago any of the two parties is better off today. No Israeli-Palestinian peace plan can succeed without a minimum of mutual trust and a real intention towards peace on both sides of the conflict. Nevertheless, in order to bring about a true peace process and to make it succeed, an input from outside is crucial. Not unlike four years ago, we should not expect any surprising peace-input from either Russia or the United Nations. The European Union still can play a limited, mediating role, but the EU remains too divided for it to conceive – let alone carry out – a balanced, credible and decisive vision regarding Israel-Palestine. In other words, there is nothing new under the sun. America still is the most important and influential outsider in the region. The foreign policy of the next President of the United States will (continue to) influence and/or determine the lives of Palestinians, Israelis and other nations in the Middle East. Many articles and (online) commentaries have dealt with the question which of the three, now two, presidential candidates would be best fort Israel. I do not think that that question can really be answered. What is important is that something is going to change, and I have the impression that that will happen in any case. Even if once again a Republican becomes President, there will be many changes at the top of all departments. Besides, John McCain understands just as much as Barack Obama that many things will have to be handled differently than they have been handled for eight years. The war in Iraq never was part of a solid long-term Mid-East policy. Only seven years after he was elected President did George W. Bush visit Jerusalem and Ramallah. Most of that seven years' period he and his government simply left Israel and the Palestinians to muddle on their own. Partly because of this, extremists on both sides of the conflict have only become stronger than they were four and eight years ago. This is why I do not understand why so many Israelis and Israel-supporters consider Bush jr. as a great friend of Israel. A real friend would have shown more sincere interest and would have tried to work more pro-actively on finding solutions. American policy regarding 'the' conflict can hardly be worse than it has been during the last eight years. Even bad policy is better than no ( real ) policy. Therefore it is good that the Bush era is coming to an end. What was true for John Kerry in 2004 also goes for the two remaining presidential candidates. None of them has made known any detailed plans for the Middle-East. Both explicitly expressed their support for and solidarity with Israel on various occasions, like two weeks ago at the AIPAC conference. Their opinions on the purpose and the continuation of the war in Iraq are very different, but that also does not say very much about what they will do when in power. For both the Democratic and the Republican candidate there are – as far as Israel is concerned – factors, facts, and influences that count either against them or in their favor. The main requirement for a successful American Mid-East policy, whether thought and carried out under Obama or under McCain, will be genuine commitment. I sincerely believe that as soon as the Palestinian and the Israeli leaders ànd populations realize that the most powerful nation in the world – if possible with support from Brussels – wants to work seriously towards peace, justice, and security in Israel and Palestine, the vast majority of both peoples will go for it and be more ready for compromises than ever before. Such an American commitment we did see under Clinton and during the Oslo process. It is to be hoped and expected that not only the Palestinians and Israelis but also the Americans learnt from the mistakes of that period. After all's said and done, what is the most important is that in the next four or eight years America will reconquer as much as possible of its lost prestige, credibility, and – economic and diplomatic but also military – power. What is good for America normally is good for its allies, and thus also for Israel. More than most other US allies, Israel is interested in an America that in every respect is strong and involved in world politics. It is up to the American voters to decide whether John McCain or Barack Obama is the most suitable man to give their country back the prestige and confidence that it seems to have been lacking for a number of years. In order to make that decision the American people does not need my opinion or advice, nor that of any other Dutch, Israeli or European man or woman.
Posted by Bert at 11:20 AM No comments:

Hatred towards Jews > Love towards Palestinians

Here is yet another example of the Muslims' hatred towards the Jewish state. Many if not most of them, it seems, simply are unable or unwilling to accept the mere existence of this state. It appears that if there is one thing that unites shi'ites and sunnis, fundamenalists and less extremist believers, it is the hatred of Jews and of Israel. In an area where water is - more than in most places in the world - the very essence of life, a major official of the Islamic Republic of Iran, repeating the words of his dead guru, urges Muslims to each use one bucket of water to erase Israel - i.e. in fact to murder all the Jews and Muslims who live here - rather than to use that precious liquid to irrigate Muslim and non-Muslim lands, which could make this area just a tiny bit more beautiful and livable. Leave it to the ayatollahs and their cronies to turn a symbol of life into a deadly weapon. There are many reasons why I feel sorry for the Palestinians, but two of the main causes for their misery are their leaders on the one hand and their 'friends, supporters and brothers' on the other.
Posted by Bert at 6:33 PM No comments: