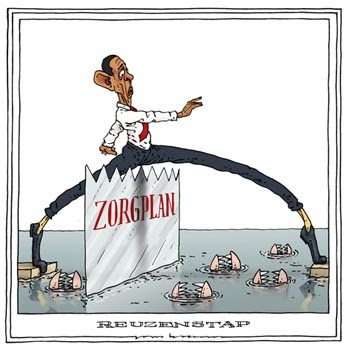 ( Cartoon by Joep Bertrams Reuzenstap = Giant step, Zorgplan = ( Health ) Care plan )
Personally, as someone who considers himself quite an Americanophile, I believe that this week's political achievement by Mr Obama - in spite of all the plan's shortcomings - can be viewed as an important step in the direction of the USA becoming a civilized - o.k., let's be fair: a more civilized - country. Abolishing the death penalty would be another step, wouldn't it? Anyway, kol hakavod to Barack Obama. Let's hope he and his brave and talented Secretary of State succeed in talking some sense into Mr Nethanyahu as well. Unfortunately, the Israeli (and, let's not forget, Palestinian and other) sharks in the Middle East are not less troublesome than the American ones, are probably even more annoying, and could eventually be more dangerous.
Posted by Bert at 10:31 AM